For this particular edition of 10 Year Recall, things get a little tricky. Technically, I’m looking back at half of a release, the other half of which came out a few months earlier, in the waning days of 2007. Thrice’s The Alchemy Index, no matter how you break it up, is a daring piece of work. Coming off the heels of their critically acclaimed record Vhiessu–which also happens to be the first Thrice album I ever cared about–the band decided to try something unorthodox: they recorded four EPs in different styles, each connected to the classical elements of life–fire, water, air and earth. Volumes 1 & 2 were Fire and Water, with the former sounding more like the Vhiessu, with its guttural vocals and chugging guitars, while the latter delved into more electronic sonic choices and softer arrangements, with some pieces of atmospheric samples, making the EP sound like it was being listened to under water. In many ways, these two parts didn’t deviate too much from Thrice’s sound, and it was especially smart to have the 4-part concept album kick-off with the part that most fans would most easily connect with.

But April 2008 brought on volumes 3 & 4 of the set–Air and Earth–which pushed the band in two very new directions. If Water was a slight departure, Air takes the ideas presented on Volume 2 and makes them sound even lighter and more, if you will, airy, although the band chose not to take things too far into that concept. So while a song like “Broken Lungs” might indulge that concept quite a bit, “Daedalus” is something in between the heavier side of Thrice and this new, exploring side. Still, the EP again doesn’t stray too far from what came before it, both in terms of the this record and previous Thrice albums. Part of this must have to do with the major turn that the Earth portion of the record is.

Thrice’s interpretation of earth is a raw, wooden sound, driven by more acoustic instruments and a more rustic vocal delivery from frontman Dustin Kensrue. The songs feel like they meander more than other Thrice tunes, but a cursory glance at the timestamps for the songs suggests that the EP is just as time efficient as the others in The Alchemy Index. It also works as the closer for the entire unit when listened to chronologically. While Fire is loud and often overwhelming, each consequent elemental group moves logically toward the conclusion of the album; furthermore, the way in which the volumes were set up also balance out the set, as well as prepare the listener for what’s to come. The fury of Volume 1 doesn’t completely dissipate for Volume 2, but it does lessen, and the electronic elements don’t go away for Volume 3, but they aren’t as prevalent, giving way to more organic sounds, a foreshadowing of Volume 4’s sonic space. All in all, the collection is a well-considered, lovely example of what a band can do when it allows itself to stretch and try new things.

Part of that is due to the make up of the band itself. Kensrue’s vocals can range from heavy screams to soft falsetto, making him the ideal singer for ever-changing stylistic choices. Lead guitarist Teppei Teranishi is not just a guitar player, but a multi-instrumentalist, capable of playing various keyboard instruments, glockenspiel, as well as saxophone and clarinet. The rhythm section, made up of brothers Eddie (bass) and Riley (drums) Breckenridge is wildly versatile, too, making the constant rhythmic, stylistic and time alterations much more attainable. And the band works well within itself, too, never attempting to stray too far from what it does well, even if that list of skills is longer than most. They may still be a rock band at their essence, but the various talents amongst the four members of the band allow them to be experimental with that sound, and The Alchemy Index, for any flaws it may have, is the beginning of the band giving itself permission to try new things.

And flaws do exist. The formatting works on a lot of levels, but the record ends up being quite long if you’re listening from the beginning of Volume 1 to the end of Volume 4, and the stylistic moves can sometimes feel too jumpy. There wouldn’t have been a better way to include all of the elements, however, as making one, shorter record with all these styles would have felt really disjointed and disconnected. Fire, while being the EP nearest to the band’s “normal” sound, is honestly a little too overdone; it tries too hard to be a fan favorite, but none of it is as good as the best parts of Vhiessu, so it suffers a little because of that. The other volumes are more interesting in that regard, as Thrice doesn’t look to use some of the tricks it learned on earlier records. Otherwise, it’s not hard to see that this is an important work for the band, as it gave them the opportunity to branch out and express themselves outside of what was expected of them.

Last thought on this one: the band re-released the album on vinyl to celebrate the 10th anniversary of the entire collection (the vinyl came out in early 2018, bridging the space between the two release dates), and it sounds really great, especially the Air and Earth volumes, which are perfectly mastered for the format. The 10-inch vinyl format is a little obnoxious (2-3 songs, then flip, 2-3 more songs, change discs), but the packaging is gorgeous and feels like my first real collectors item record purchase. This isn’t my favorite Thrice record, but I appreciate it the more I dig into it, and the growth they allowed themselves to make on it certainly makes the entire project worthwhile. 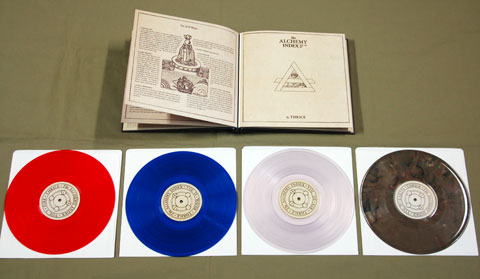