At the beginning of the year, I set up a calendar to help keep me on track with my writing throughout the entirety of 2018. For the first few months, this worked really well. I was able to effectively balance all my responsibilities–marriage, fatherhood, work, church–while maintaining a weekly balance of blogging, working on my book and songwriting, along with a little bit of other bits and pieces along the way. I didn’t always follow my ideas completely, but up through April, I was doing reasonably well.

As a college educator, the early part of May is tricky. Most of my final papers for my classes are due within the first 4-6 days of May, and grades are usually due within the week or so after that point, thereby making it difficult to keep up with extracurricular activities outside of grading and wrapping up the semester. The week after that is usually about decompression, hence why even now, I’m only just now getting back to focusing on following the calendar. The summer hopefully shouldn’t be too busy, but my plan is to continue working as best I can to stay on top of things here. We shall see.

So today I’m offering condensed versions of my two planned early-May posts, both new additions to my now-regular 10 Year Recall series. The first is Death Cab For Cutie’s Narrow Stairs, which was released on my birthday ten years ago. 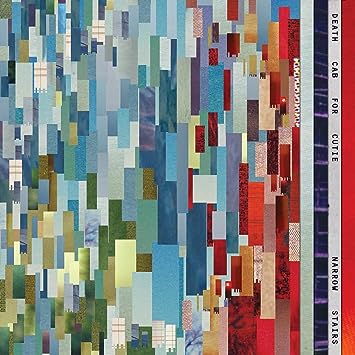 My twenty-fourth birthday fell on a Tuesday, which meant that the main thing I was looking forward to that year was to hope for the release of an album I’d like. On the whole it was pretty disappointing, with a new album from Jason Mraz (We Sing, We Dance, We Steal Things), along with new albums from 10 Years, Filter, Finger 11 and Whitesnake, among others, but the highlight for me was definitely Death Cab’s sixth full length album. I’d liked Plans, the band’s major label debut and 2005 follow-up to their massive indie hit Transatlanticism, but it hadn’t hit home for me the same way that the latter album had, so I was looking forward to what Narrow Stairs would have to offer. This was only heightened by the appearance of the album’s first single, the 8-minute, meandering slow burner “I Will Possess Your Heart,” which the band released in its entirety to radio two months prior to the album’s drop date. This was certainly very different from what I’d expected, and so I was looking forward to seeing what the rest of the album held.

The album’s opening track, “Bixby Canyon Bridge,” also serves as a bit of a thesis statement for the record, as the song tells the story of Ben Gibbard’s pilgrimage to Big Sur, the supposed site of Jack Kerouac’s release from his alcoholism and other demons. Gibbard, at least in the song, seems to not have found what he was looking for, and the rest of the record hones in on that feeling of loss and loneliness. In fact, Stairs features some of Gibbard’s saddest lyrical content, which is saying a great deal given some of the songs of Death Cab’s past.

There just really isn’t much hope here, but it doesn’t take away from the musicianship and, surprisingly, the enjoyment of the record. Other than the lead single, the songs are fairly jovial sounding, with a lot of Gibbard’s pop sensibilities shining through at various points on the record. It’s a strange and sometimes unsettling contrast, and it’s a testament to the talent of the songwriters that they manage to make it work at all.

It isn’t a perfect record, though, as tunes like “Cath…” and “Talking Bird” always feel like a bit of a drag to me, and don’t fit next to each other, especially so early in the album (strange, too, that the two songs in together are shorter than “I Will Possess Your Heart” and yet the latter feels like it has more urgency than the other two songs). Of two of the album’s best songs, “Grapevine Fires” and “Long Division,” only the former was a single, and the final one at that, even though they arguably encapsulate the lyrical threads and overall sonic feel of the album. And lastly, even though I like “I Will Possess Your Heart” a great deal, it could definitely have been trimmed a little and not lost any of the main feel and message of the song.

Overall, Narrow Stairs is one of the stronger album in Death Cab’s catalog, and is an album that has aged pretty well over the last decade.

The second album is the sophomore release from indie rockers The Myriad called With Arrows, With Poise, which was also released on May 13, 2008 (what a great year for my birthday!). Sonically this is one of my favorite albums of all time. It possesses a stirring sense of urgency from track one (“You Waste Time Like A Grandfather Clock”) to track 12 (“Stuck in a Glass Elevator”), as it appears to tell the story of some sort of post-apocalyptic society fleeing for its life from a great threat (possibly, as the cover alludes to, some sort of dragon-like creature).

The album itself sounds huge, with layer upon layer of guitars and, most especially, drums, feeding into the vastness both of the sonic space and the driving urgency of the record’s story. The signature of the band’s sound, however, was certainly the unique vocal stylings of frontman Jeremy Edwardson, whose tenor soars above all of the record’s various layers of sound. The band actually gained a good deal of notoriety with their single “A Clean Shot,” with a video featured on MTV2 and the band having won the 2007 “MTV2 Dew Circuit Breakout” award for the song, which was on a 5-track preview EP for With Arrows called “Prelude to Arrows” in late 2007. That song is a thumping example of the rest of the album’s giant sonic choices, making it a great choice for a first single.

The only thing I don’t like about this record is how overlooked it was. In spite of the MTV2 award, the album never really took off, and that, along with the tragic loss of drummer Randy Miller in late 2010, saw that the band never really took off to the heights they might have. Unfortunately it also meant that we never got a third album from The Myriad, and likely means the record will never be pressed to vinyl, a very sad thing indeed, as this album would sound spectacular on the format.

Okay, so now we’re all caught up for the early weeks of May. I’ll try to do better next time. Thanks for sticking with me.