It’s been awhile since I delved into one of these, what with all the other things to write about, but as I was looking at my now-failed attempt at setting up a calendar for my writing for this year, this one jumped out at me. Maybe it was because the band in question–Copeland, of Lakeland, Florida–has recently popped back into the world with what appears to be a new album (teasing its fans with a random assortment of Instagram posts over the last few days). Or maybe it’s because the record stands out as one of the most intriguing albums I’ve ever heard and it feels right to revisit it more than others on my list.

Copeland is a bit of a strange entity. When I first discovered them, they were opening for Mae at The NorVa in Norfolk, VA, and lead singer Aaron Marsh looked like he’d rather be literally anywhere else, the level of his perceived introversion was so great. Still the band’s set was excellent, and I immediately sought out their debut record, Beneath Medicine Tree, which I probably purchased from my local Tower Records, because it was 2003, and this was a thing kids did back then. The album was guitar-driven rock with Marsh firmly displaying his heart on his sleeve on a record focused on his grandmother dying in the hospital and a relationship the singer was in at the time. For all its flaws, the album still has some standout tracks (“Testing the Strong Ones,” “There Cannot Be A Close Second” & “California” are the best), and drew attention to the band in the indie music scene of the time.

The band’s follow-up, 2005’s In Motion, leaned even more heavily into the rock sound, and even featured some tunes that felt like radio rock of the day, while maintaining Marsh’s signature lyricism and well-trained vocals. The band would never be considered a hard rock band, but their sophomore record is certainly their heaviest (although it also features some pretty significantly softer moments on tracks like piano-driven “Sleep” and  the moody “Kite”), even if that isn’t saying too much. Their third release started a 180 degree turn, as Eat, Sleep, Repeat is still very much a guitar album, but starts to see the band delving into new sounds, like xylophones, brass and more atmospheric sounds, along with time signatures that were a little non-traditional for bands in their genre. And by the time You Are My Sunshine came around in 2008, the movement away from traditional guitar rock had pretty much disappeared. This was a new version of the band, and is one of the reasons that the record stands out so much amongst their early catalog.

To be clear, there are guitars on Sunshine, but rather than being the focal point of the album’s sonic space, Marsh’s keyboard takes over as the primary instrument, with other keyboard sounds and more classical instruments like bassoon, oboe and clarinet joining a string section and more horns as staples of Copeland’s sound. There are even suggestions of electronics peppered throughout the record, something Marsh and Co would dive into even more for their next record, 2014’s Ixora. What results is a record almost entirely devoid of anything that sounds like anything from their first two records and only contains cursory connections to ESR which came before it. Sunshine is a tremendously quiet record that pushes Marsh more into his falsetto and other higher voice registers, as if the band needed you to know that this is art and these songs are difficult. Yet the songs are simple in structure, foregoing the more complicated elements of songs on the previous record, and giving into the truth that a simpler structure allowed the band to be more experimental with the instrumentation. This is a daring choice, and one that mostly works, even if there are times where the album can sometimes feel like it becomes part of your surroundings rather than standing out. It’s beautiful and never boring, in spite of how much it maintains its overall feel and mood.

For all its loveliness, Sunshine is not a perfect album. The inclusion of early-Copeland retread “Chin Up” is odd here, mostly because it doesn’t quite sound like the rest of the record, although the band does their best to not make it seem too far out of left field (partially by placing it early enough in the track listing, and deftly in between songs that really commit to the new sonic space). And as I said, there are times where the album doesn’t require much of you as a listener, as it is possible to not be an active listener for this one, which can, likely on purpose, sound dreamy and spacey throughout its run time. It should be noted, however, that really digging into what the album is doing is well worth it, as active, engaged listening is essential for really understanding this record.

It should also be noted that the packing for the CD version of this album is one of the last great CD’s I remember owning. The special edition that I owned back in 2008 came in a simple almost khaki colored box, labeled very elegantly: 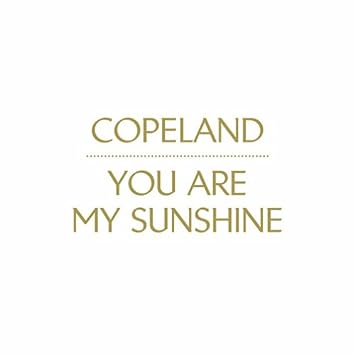 Inside the CD was sleeved individually, along with a making-of DVD and an additional DVD with “music videos,” mostly made up of abstract visuals mostly befitting the tone of the record. While the quality or necessity of these extras might be in question, the care taken into creating something that people wanted to own in an age where digital ownership was beginning to take over music sales. Such was the beauty of the CD, I almost held onto it when I unloaded all my CDs a few years ago. Now I own it and the rest of the band’s discography on vinyl, and of all the earlier albums, this one sounds the best on that format. Among all things to say about this album, the care that clearly went into it stands out the most, no matter how you hear it.